Bill Lovell is building a robot army. No, don’t worry. These robots are here to help! Bill is the CEO, Chief Designer and Engineer at c-Link Systems, Inc, which was first set up for factory automation and fiber optics, but never quite found its niche in the saturated and cut-throat industry. After Hurricane Katrina, Bill was pulled in another direction.

“I was still tinkering with my model when I must have had 6-7 phone calls from people who knew about my large Forager robot, wanting to know if we could deploy some to help clean up after the disaster. The thing is huge, over 6 feet long, and would have been a huge help if it were ready for that kind of job. This motivated me to finish it up and get the product on the market.”

A Passion for Robotics

Most people don’t build labs in their homes, but most people aren’t Bill Lovell. While he was in the Air Force, Bill didn’t spend his free time idly. Using every benefit allotted to him, Bill got an education almost equivalent to Neo from The Matrix being plugged in and learning Kung Fu. At the end of his tenure, Bill had earned degrees in mechanical, industrial, and electronical engineering. After just missing the cut for Astronaut auditions in the late 1970s, Bill took research into his own hands.

“Right after I got out of the service, I was working in satellite control systems. I worked ion propulsion for a couple of years, and it got expensive to do research. Mind you, I was doing this research out of my home, and my electric bill one month was $1,000!

“My first robot was made out of wood. Wood! The whole thing was bulky, clunky. My first control system was all tubes!”

Bill had been tinkering with his Forager Chassis model for some time when Hurricane Katrina hit New Orleans. It was then that he realized it might be time to change the business model for c-Link Systems.

“So, I was still tinkering with [Forager] when Katrina made landfall, and I must’ve had 6-7 phone calls from people who knew about my big robot asking if it could come help clean up after the disaster. Forager is huge. It’s over 6’ long, I can sleep on top of it, so it’s big enough to move some large debris. It wasn’t quite ready yet, but it did motivate me to finish the model and get the product on the market.”

And thus c-Link Systems pivoted to robotics, and the Forager added “horse stall cleaner” to its resume.

When you own horses, there are some jobs that are just a pain. There’s no other way to put it. Cleaning stalls, bringing hay, and clearing roads are time-consuming, messy, dangerous, and taxing to the body. Lovell’s creation is more than ready for these jobs.

“Forager’s got an arm that can pick up 125 lbs, it’s got a dump body, and you can put a blade on it for road clearage.

“With the new Scrounger bot, which is 2/3 the size of Forager, you have a bot that’s nimbler and can get around stalls a little more quickly. With either bot, there’s no worries about rough terrain as tracks allow them to climb over and through anything like a tank. Our track system is straight out of the old Panzer IV! 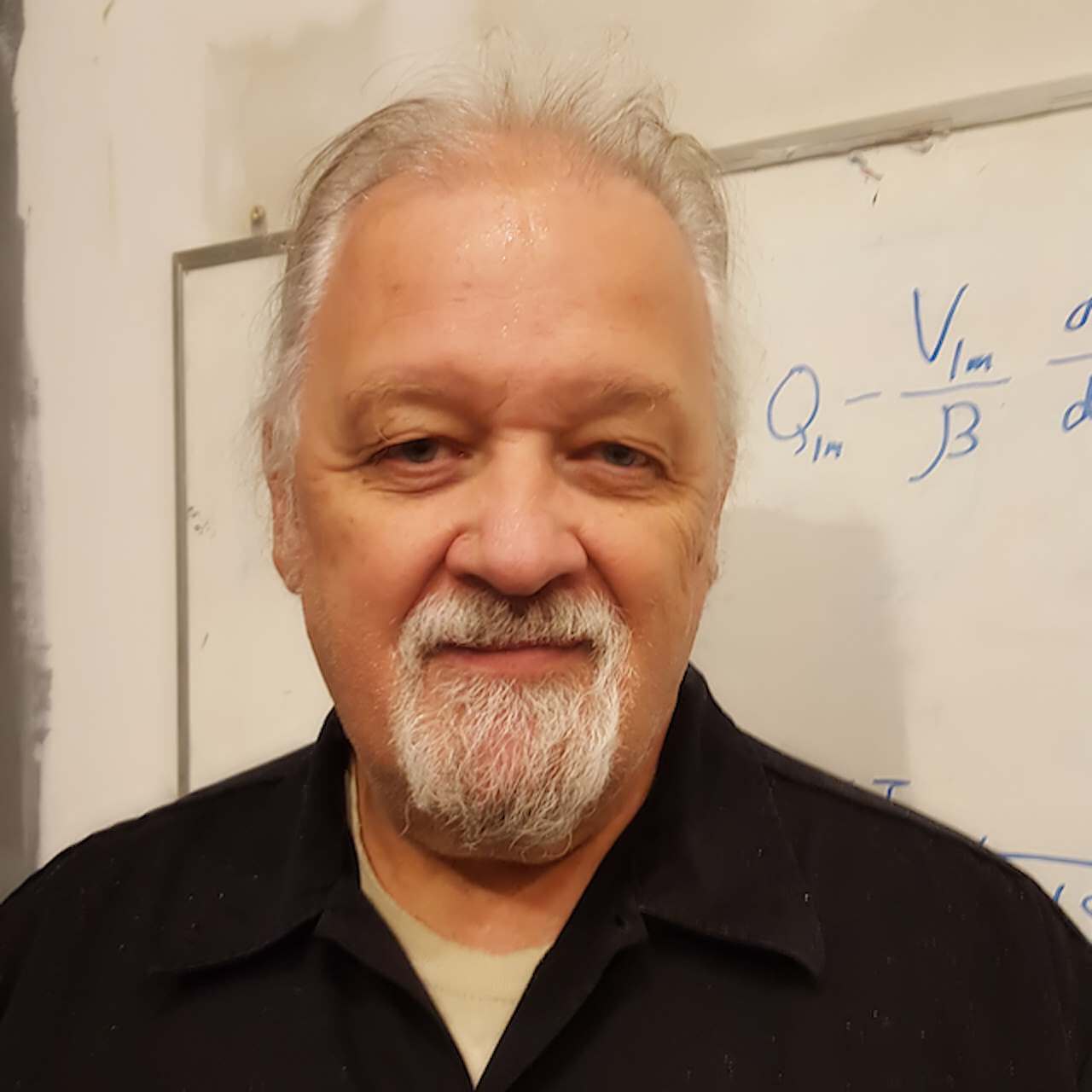 “We use Alibre Design for all concept work, part design, subassemblies, part fitting, generation of 2D drawings, BOMs, export for Keyshot rendering and generation of CNC g-code All of our robots are 100% built in house and modeled in Alibre Design.
Bill Lovell
CEO, Chief Designer and Engineer - c-Link Systems, Inc

Bill isn't the kind of guy who would have all of this knowledge and not share it, and it shows in his passion for STEM education in young people. Bill teamed up with the former editor of Robot Magazine to design curriculums that connect education to the real world. While he volunteers his time at local schools, his curriculums are provided at no cost to educators who are looking for assistance.

"The 3-year version of my curriculum is free, public use. I encourage any educator to review this program, and teach what they can from it. I also provide study guides upon request." 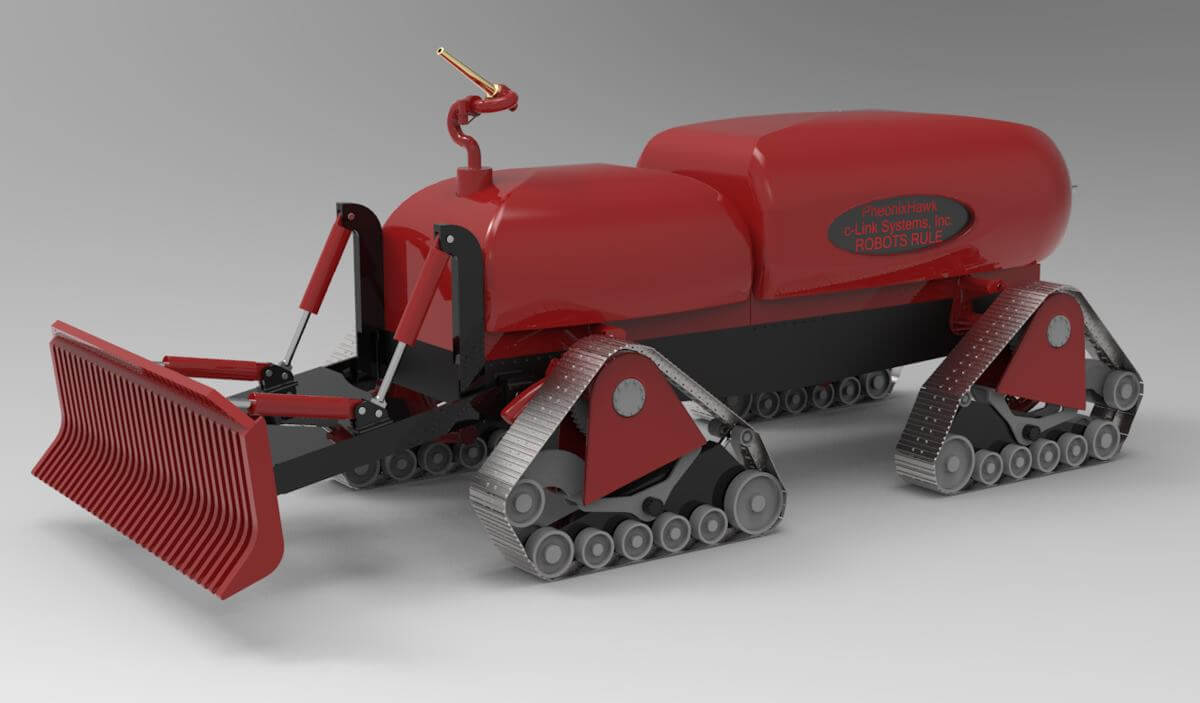 When it came time to design the Forager Omni-Chassis, Bill wasn't about to go back to using his drafting table and t-square, but he definitely didn't want to shell out big bucks or spend a ton of time learning a new program.

"I had Solidworks, it was cumbersome. AutoCAD was way too expensive, and on top of that they wanted me to take a 2-3 week course. If the software isn't intuitive, it's useless. I was NOT going back to a drafting board, I’ve gotten lazy. So, I kept searching.

"I found Alibre Design through a basic Google search, and it had everything we needed! We bought it as soon as we found it and then upgraded until we owned the Alibre Design Expert. We use Alibre Design for all concept work, part design, subassemblies, part fitting, generation of 2D drawings, BOMs, export for Keyshot rendering and generation of CNC g-code All of our robots are 100% built in house and modeled in Alibre Design.

"When I started using Alibre Design for CNC work, it was a huge time saver because I didn’t have to write the g-code or do the CNC by hand. Stepping back and letting the CNC mill or lathe do the work frees me up to focus on the future of these robots."

"When I started using Alibre Design for CNC work, it was a huge time saver because I didn’t have to write the g-code or do the CNC by hand. Stepping back and letting the CNC mill or lathe do the work frees me up to focus on the future of these robots."
Bill Lovell
CEO and Chief Designer and Engineer
c-Link Systems, Inc