From the time Bob Carlton was five years old and his parents took him to see the Thunderbirds perform at Kirtland Air Force Base in Albuquerque, New Mexico, he dreamed of an adventure in the air. Bob said that watching the Thunderbirds was the most amazing thing he had ever seen, and it inspired him to learn aerobatics, putting on spectacular shows for millions of people every year.

Armed with that inspiration and a strong determination, Bob, a rocket scientist for a major national laboratory, worked to make his dream come true in his spare time. He started flying hang gliders at the age of 19 and later secured a commercial pilot’s certificate, logging more than 2000 hours and performing aerobatics professionally for the past 15 years.

For years, Bob watched airshow performers and couldn’t believe people got paid to do loops and rolls, the stuff of fantasy for him. Now that he performs across the country, Bob understands why they get paid.

He says that the flying is the easy part, and the hard part is everything you have to do before you go up into the air. Just as in other industries, startup ventures in the aviation industry have the odds stacked against them, with a relatively small percentage of businesses surviving more than a few years. Besides pouring one’s heart and soul into these dreams, it takes much time and money before you make a profit.

Against the odds, Bob has established himself in the business not only as a successful aviator and entertainer, but also as an aeronautics designer. In his current partnership with a Czech aerospace company, he is using Alibre Design to modify the design of his Salto (Latin for somersault) sailplane. The Czech company will build the engine to complete the conversion into a jet-powered plane. As part of the certification process for the Federal Aviation Administration (FAA), Bob will also test pilot the plane. 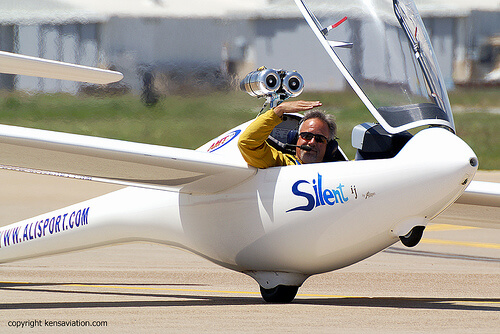 The Challenge of Designing a Jet-Powered Aircraft

To modify the design of an existing fiberglass glider and convert it into a jet-powered aircraft requires a fully capable 3D design program. Bob uses an expensive 3D design program at work, but he needed an affordable and powerful program to design his plane. Since Bob’s partner company would build the plane’s engine, he also needed to be able to import their files seamlessly and present professional looking models to them.

For nearly 20 years at his job, Bob has used Pro/ENGINEER (Pro/E), which he calls a very capable but very complex program. Bob said, “I’d hate to have to learn Pro/E if I didn’t have much time. Plus, you really need a dedicated IT person to network and manage it.” Since Bob needed a capable 3D solid modeler at an affordable price, he searched on the Internet and found Alibre Design. “Alibre Design had a much faster learning curve, offered the features I needed and the price was right. I downloaded the program and was designing usable parts within the hour.” 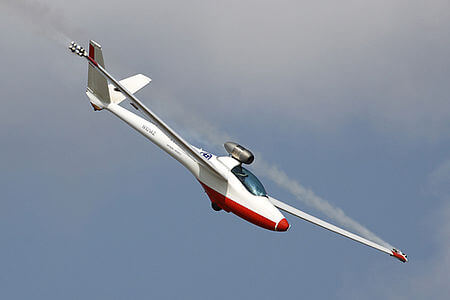 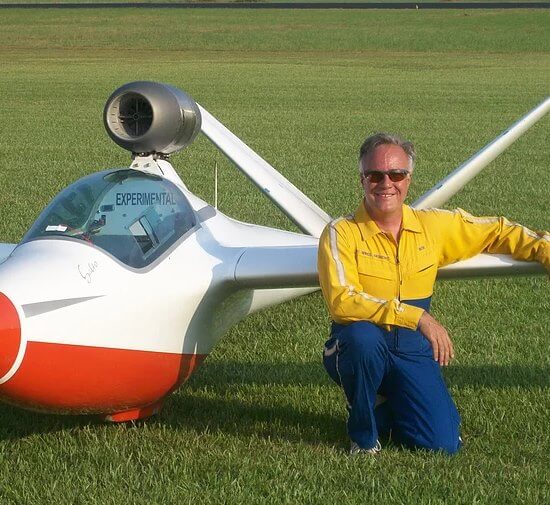 “Alibre Design gives me the ability to design to a fine level of detail, and the devil is in the detail.”
Bob Carlton
Pilot and Designer
Silent Wings

At a reasonable price, Alibre Design offers a solution that is powerful enough to design a flight-tested airplane. When the stakes are that high, you have to be extremely confident in your design software – here are some of the reasons that Bob has so much trust in Alibre Design:

Interoperability – While partnering with the Czech Republic to build his plane’s engine, their engineers sent STEP files to be imported into Bob’s model. Alibre Design allowed him to marry the two models together easily. When Bob met with his partners, he was able to make a professional presentation, impressing the group with his results.

3D Parametric Solid Modeler – Bob cannot get by with 2D anymore. He models complex shapes, curves and thrust cones for his projects, all requiring full 3D capability. Bob said, “Alibre Design gives me the ability to design to a fine level of detail, and the devil is in the detail.” It is hard to know when beginning a design exactly how much space to allow for each item. When Bob was sketching his designs by hand in 2D, he would reach the end of his sketch only to find out that there wasn’t room for the fuel lines, connectors, and fuel pumps. Bob continued, “With Alibre Design, I can nail down the details on the fly and easily debug any of the details that aren’t right.”

Part Libraries – Bob finds the TraceParts CAD part library in Alibre Design extremely useful, saving him hours of design time. Bob said, “The small parts take more time to model than the larger ones. Alibre Design provides many of the small parts you need and allows you simply to drop them into the design. This is integral to the system.”

Plug-in Stress Analysis – Using finite element analysis (FEA) software add-ons available directly in Alibre Design, Bob verifies his designs with Jet-Poweredfirst-pass engineering analysis to test the viability of the design in software. Bob said, “I just drop the files into the FEA software to do the analysis of parts to make sure they stand up to flight loads and FAA requirements.”

Alibre Design saves Bob a tremendous amount of time by allowing him to do everything in a 3D environment instead of starting in 2D and transferring the work to 3D. The work needs to be right the first time. Cutting the fiberglass and finding it doesn’t work takes too much time and money; Alibre Design allows you to correct your errors in the design stage easily and gives you the confidence that the dimensions will work.

Instead of presenting designs sketched on a piece of paper to the Czech Republic and the FAA, Bob shows them professional 3D design and analysis models that look like the real thing. The professional quality of the work instills confidence in both groups. The Czech Republic knows they are giving the engine to someone who takes it seriously and knows what he is doing, and the FAA is more apt to approve the designs when presented with this level of quality.

For Bob, each project is a stepping stone to the next. Since his next plane will be designed to use the same engine, he can save time and money by starting with the existing design files and modifying the plane.

Bob Carlton began flying in 1979 at the age of 19. He has logged more than 2000 hours in hang gliders, airplanes, helicopters and sailplanes. Since flying in his first professional airshow in 1993, Bob has continually added innovative performances to his repertoire such as barnstormin’ biplane aerobatics, helicopter sailplane tow, night aerobatics with strobes and pyro and the world’s only twin jet sailplane. Bob is currently looking for a major sponsor to represent his Silent Wings Airshows. To find out more, visit https://www.desertaerospace.com/

“Alibre Design had a much faster learning curve, offered the features I needed and the price was right. I downloaded the program and was designing useable parts within the hour.”
Bob Carlton
Pilot and Designer
Silent Wings