Have you ever considered entering an international contest and then reconsidered because you thought your chances of winning were slim at best? Not Bill Price. It didn’t bother him that he was fairly new to 3D software and designing his first major project to compete against hundreds of entrants in the 3D InterOp Modeling contest. In fact, the contest deadline inspired him to complete a project he was working on ahead of schedule.

In a little over a year, Bill purchased and learned Alibre Design, designed a V-Twin air-cooled motorcycle engine, entered his design in the contest and walked away a winner – or possibly, rode away. VROOM!

As an avid motorcycle fan and someone who has restored them for years, Bill wanted to design his own. Undoubtedly, his favorite British and Italian motorcycle makers, Norton, Triumph, and Ducati, would influence the design of his dream machine. He knew it would appeal to a niche group of enthusiasts who wanted something big and powerful but weren’t interested in four-cylinder Japanese water-cooled motorcycles.

Before Bill could start his design, he needed to find a robust 3D solid modeler that wouldn’t cost too much. Next, he needed to learn it fast enough to meet a contest deadline ahead of his intended schedule.

Shopping for the Right Price

Bill was first exposed to 3D software in the early nineties on a former job. Because of his interest in designing a motorcycle, he started looking at 3D modeling programs and saw that they had progressed an awful lot in the last 15 years. He spent about one week looking at SolidWorks, but he couldn’t justify paying so much for the program. 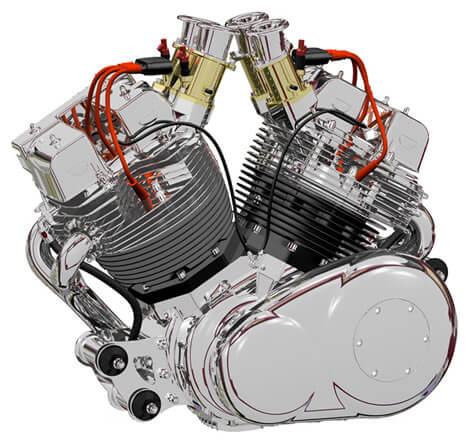 In search of a less expensive alternative to SolidWorks, Bill went straight to the Internet. That’s where he found Alibre Design.

Bill said, “Without CAD software firms like Alibre, I could not possibly have afforded a 3D modeling package powerful enough to design my motorcycle engine! Alibre has definitely empowered people like me who don’t have the cash for an expensive product.”

As a user of Alibre Design, Bill received an email inviting him to enter the upcoming 3D InterOp Model contest. Alibre, LLC and Spatial Corp. have been working together for years to make state-of-the-art 3D technology accessible to everyone. The two companies encourage users of Alibre Design to enter an annual design contest. Spatial selected winning entries from 3D CAD applications supported by their InterOp translators, which includes Alibre Design.

A Solution that Encourages Fiddling to Perfection

All of the designing, part and assembly creation on Bill’s engine were completed in Alibre Design. Some of the features that helped Bill accomplish his task include:

At about one-fifth the cost of the more well-known, expensive programs, Alibre Design saved Bill money and was powerful enough to design the intricate details of a motorcycle engine. Bill said, “Alibre Design does a great job at a reasonable price.”

In addition to completing his air-cooled motorcycle engine design, Bill won third place and $1,000 from Spatial plus first place and a one-year maintenance agreement from Alibre. To win the contests, Bill’s design had to demonstrate innovative use of CAD design, assembly and feature modeling, dimensioning and tolerancing. Congratulations Bill!

Bill Price is a semi-retired motorcycle enthusiast who repairs motorcycles and homes in Victoria, British Columbia. Bill has been using Alibre Design for about one and one-half years and plans to use it to complete his entire motorcycle design. His goal is to find an investor who will enable him to build and sell his dream machines. 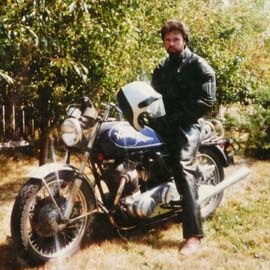 “Without CAD software firms like Alibre, I could not possibly have afforded a 3D modeling package powerful enough to design my motorcycle engine! Alibre has definitely empowered people like me who don’t have the cash for an expensive product.”
Bill Price
Founder
Bad Dog Cycles