In this day and age, how many of us know an inventor who has spent a quarter of a century designing, building, testing, using and perfecting his invention? Alibre knows of one such individual, Vern Godfrey, and is proud to have been a part of his journey to patent his unique Zero Turn Radius (ZTR) mower – The BeeLine.

When Mr. Godfrey was faced with precious little time to produce patent drawings and at the same time develop a new prototype for a product introduction at the industry’s largest exposition, his company, BeeLine Mowers, relied on Alibre Design to help them accomplish what, for many, would have seemed an impossible deadline.

A Race Against Time

Although Vern had developed a ninth prototype representing his latest mower ideas and had taken numerous photographs of it, his attorney informed him that the patent office required a set of drawings with a very specific format and layout, and photographs wouldn’t do. 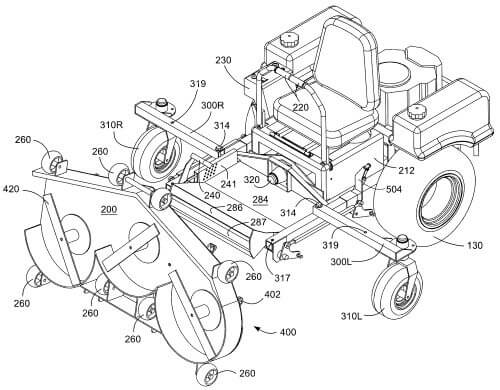 In the meantime, Vern had registered to demonstrate his invention at the Green Industry and Equipment (GIE) EXPO in Louisville, Kentucky, the industry’s largest and most important event where equipment manufacturers come each year to showcase their wares. Before putting his mower on the starting line, Vern needed to protect his intellectual property. That meant he needed drawings in record time.

Because there was a display area and a demonstration area, Vern needed two prototypes for the show. He had developed nine prototypes, but only the ninth had the design he wanted to showcase. And after 300 mowing hours, it had a little wear and tear, but it would still work in their outdoor demonstration area. With little time left, he still needed a shiny new model for the indoor booth space.

Throughout 25 years, Vern developed prototypes by building parts and testing them. If they didn’t work, he tinkered with them until they did. Now with two impending deadlines looming, Vern had less time for tinkering. He looked to his son Jeff, who writes manufacturing software for a living, to step in as the design engineer on the project and create drawings of the ninth prototype in his spare time while Vern built the tenth prototype.

Before trying a CAD program, Jeff had several failed attempts at tediously tracing photographs and converting them into 2D drawings. Jeff said, “While my attempts may have eventually worked, for all my efforts, I would have ended up with a few 2D drawings. If later I needed a view from a different angle, a view with certain parts hidden or anything to be different, there was no way for me to do that.”

At that point, Jeff remembered a copy of TurboCAD Pro he had from several years earlier. Since it was too expensive for him to upgrade, he started the design for the patent in the old version. Because he was still working in flat, two-dimensional drawings without parametrics, changing any dimensions was extremely time-consuming with the extensive drawing rework required. Jeff said, “It was impossible to get from where I was to where I wanted to be without losing much of my work. I was spinning my wheels and spending more of my time fighting TurboCAD than doing anything productive. At the rate I was going, I was not going to finish in time.” He decided to look for another program. 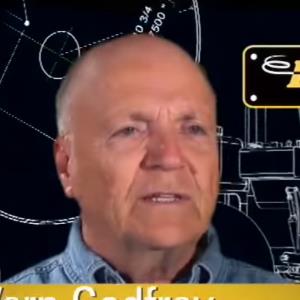 “It was impossible to get from where I was to where I wanted to be without losing much of my work. I was spinning my wheels and spending more of my time fighting TurboCAD than doing anything productive. At the rate I was going, I was not going to finish in time.”
Vern Godfrey
Founder
Beeline Mowers

Alibre to the Rescue

Jeff searched online for CAD programs that could do 3D parametrics and found a 30-day free trial of Alibre Design. Jeff downloaded the software and started using it for modeling the prototype, finding it extremely easy to learn, with all the features he needed to model this relatively complex piece of equipment. Jeff said, “I did my homework, and there is nothing out there anywhere near Alibre Designs’s capabilities for the price. No other design software had a chance after we found Alibre. I scrapped what I had done in TurboCAD Pro, and started over.”

“Alibre Design is incredibly easy to use,” remarked Jeff. With no formal training in the program, Jeff modeled the entire mower with more than 200 parts in his spare time in six weeks. So in the equivalent of just two and a half workweeks, Jeff learned Alibre Design, measured and sketched each part of the prototype parked in his driveway and modeled them accurately on his computer. Jeff added, “BeeLine could have spent thousands more on SolidWorks or Inventor, but we’re not a big company and every dollar counts. Besides, why pay for stuff you don’t need?”

Jeff said, “Using Alibre Design is a straightforward process that is easy to relate to because it mimics how you build things in the real world. The logical and intuitive nature of the program followed the way my dad and I learned mechanical skills on the farm. Using such a well-organized program made the whole process faster.”

With Alibre Design, Jeff was able to easily model the patentable features of the BeeLine mower, showing how it uniquely overcomes one of the greatest shortcomings of most mid-mount mowers – the difficulty of deck maintenance, including safely sharpening and changing the blades. Jeff modeled the process of how one person can remove the mower deck, roll it in front of the mower and tilt it in a vertical position – a process that takes four minutes without the aid of additional tools or a jack. Jeff said, “Although I was working with complex functions, I had the comfort that I could visibly show each step without having to redo any of my design work.”

Jeff had one night to show the originality of how the tubular automotive shock absorbers twist in different directions to create a smooth ride, even over rough terrain. He said, “I could not have shown the motion in 3D space without Alibre Design. We would not have made the patent filing deadline without it.”

“Being able to set up and test the mechanical linkage of parts was huge for this project!” exclaimed Jeff. “We needed the parametric capability, and Alibre Design was the only software remotely in the ballpark price that I could have used to complete our complex designs on time.”

Jeff remarked, “Alibre saved me countless hours over my previous failed methods.” Its ease of use resulted in drawings being delivered to the patent attorney in time to receive a pending patent on the new BeeLine mower five days ahead of schedule.

Jeff said, “Although my dad had no computer skills, he realized the huge advantage of modeling when he wanted to make some fairly significant frame design changes from prototype nine to ten. Having the basic frame design and modeled core components already designed and tested eliminated the trial and error and saved an enormous amount of time. What would have taken weeks of guessing and tinkering took a few days with Alibre Design.”

To design, hand build each part, paint and assemble the mower took about seven weeks. Vern started up the new mower, drove it onto the trailer next to the other mower, and drove to the show, where the BeeLine was a very popular item – congratulations BeeLine!

Vern accomplished all of this without spending tens of thousands of dollars on software.

BeeLine, a Missouri company, owned by inventor Vern Godfrey, has developed a Zero Turn Radius mower which has evolved during more than 25 years of design, testing, and use. It utilizes a mix of solid and proven engineering principles as well as patent-pending ideas. Its unique features include a two-piece, pivoting frame that follows ground contours more smoothly and accurately than existing designs, tubular automotive shock absorbers that provide a smooth ride and a front-frame design that provides a quick-disconnect system on the deck for maintenance. The simplicity of the mower’s design makes it practical for the residential market and yet rugged enough to withstand the most demanding of commercial conditions.

“I did my homework, and there is nothing out there anywhere near Alibre Design’s capabilities for the price. No other design software had a chance after we found Alibre. I scrapped what I had done in TurboCAD Pro, and started over.”
Vern Godfrey
Founder
Beeline Mowers