Matt Blake carves out a niche with Alibre and CNC

One could call Matt Blake a luthier – a builder of custom guitars – but one thing you can’t call him is a guitarist. “I’m actually a bass player,” he says. “but my guitar friends kept complaining that I wasn’t making them any guitars, so that’s what I’m mostly doing now. I don’t know how to play them, but I can build them.”

Most in demand these days are Blake’s semi-hollow body guitars, with a deeper and warmer sound like acoustics but solid electric pickups. The designs have a noticeably unique style of construction, for instance, the pick guard – normally just a detachable piece of plastic on most semi-hollow bodies – is integrated into the wood of the neck as one continuous piece. Unique too is how Blake produces the instrument. He drafts out a 3D representation of his idea in Alibre Design first and then machine-cuts each major component.

Blake did not start with intentions of selling his work. He started making instruments simply as something to do in his spare time.

“I built my first instrument all by hand — it was my therapy during my divorce,” laughs Blake. “Everybody liked the guitar. Everybody said I should be building these for other people.” Since then, he has made 15 custom guitars and basses for other players and recently brought a few of his newer models for sale at a Nashville trade show.

After his first handmade project, Blake decided to model the guitar first and precision-cut the wood components on his CNC machine, which he had used primarily to build 2D projects like cabinets. He tried to learn the 3D module that came with his CAM software but had a hard time picking up the basics.

“I even had the training discs with BobCAD, but it was still very frustrating to learn. So when I looked for a new 3D application, I checked out the online forums of the software to make sure that there weren’t a lot of complaints about the program. Alibre Design was one of the first I looked at. The price was good, and other people seemed to like it, so I went for it.”

With no prior experience with parametric modeling, Blake taught himself as he went along, spending an hour or so in the evenings tweaking the details of his guitar. After six months, he could confidently form everything he needed in the assembly.

“It’s most challenging to build the wavy surface of the body,” he says. “Still something I’m trying to master, but the ones I’ve done have been turning out all right.”

While the assembly, sanding, and finishing work are much the same as traditional instrument making, modeling and machining basic parts cut out a lot of do-overs out of the process in its early stages.

“Once I finish a model, I can cut out the pieces, drill the switch holes, and everything fits together as designed. The instruments turn out looking good, they sound good, they play well. I couldn’t be doing what I’m doing if it not for a program like Alibre Design.” 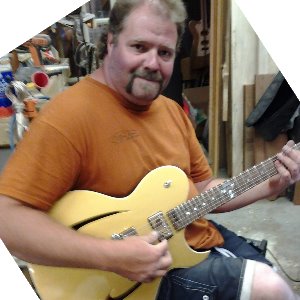 “I even had the training discs with BobCAD, but it was still very frustrating to learn. Alibre Design was one of the first 3D modelers I looked at. The price was good, and other people seemed to like it, so I went for it.”
Matt Blake
Founder
Cavey's Clubs