A Vision Beyond Thread Grinding

John’s grandfather and father built quite the business in CNC thread grinding, and the sudden death of his father forced John to leave school at age 20 to take over the business. Along with his brother, John spent the next 15 years modernizing the facility at Jewelers’ Machinists, Co. by purchasing precision CNC machining and grinding equipment.

“We have a 3rd generation family company, and we do precision CNC Thread Grinding for the defense industry since 1947,” says John.

All that changed after John had a dream that included the concept of a rolling gearbox. He furthered this idea when working on a CNC grinding machine, and founded Rolling Motion Industries in 2016. John ambitiously wanted to take the company to the next level, but he was so busy working to supporting his family that taking time off to go back to school wasn’t an option.

“The idea just popped in my head…”

Always a technical-minded guy, John often dreamed up ideas for different inventions he’d like to tinker with. One day, the idea for an efficient traction drive sparked an entire company into motion.

“About 12 years ago this idea popped into my head for the traction drive and I was like, ‘Wow! This is neat!’ I was always a visual and mechanical person, and I was horrible in school. Beyond horrible. So I actually got up the next day at 3 AM, went to work and built a rough prototype. And… it worked! That’s when I said, ‘Screw it, let’s do this.’”

“I contacted a patent attorney and got that ball rolling, and as time went on, other patents were born. And I remember I was doing everything in my head and designing on a piece of paper. That wasn’t sustainable, but I knew all my customers used CAD, and I was like, ‘Shoot. I gotta learn this stuff.’”

Propelled by the drive to make his dreams a reality, John knew that becoming a 3D CAD master was the key to his business being successful. The only way for him to move forward with his vision was to create it all himself.

“A friend of mine recommended Alibre Design, so I bought it and gave it a shot. Downloaded it and at first, I was like, ‘Wow, what am I going to do now.’ But I took my time with it, and I actually learned it pretty quickly. You’re always learning with CAD, obviously, but if you’re teaching yourself it can come pretty easily. In a day or two, I was getting around pretty well.”

“Basically, we came up with a new way to get from point A to point B. Over gear boxes, v belts, and timing belts,” John says. Inventors are often humble about their inventions.

Traction drives have long been used to transmit power, but Pawloski’s RMI Traction Drive utilizes rolling motion to eliminate friction and inefficiencies with 6 moving parts. The below video walks you through the intricacies of the RMI Marmalade Traction Drive. 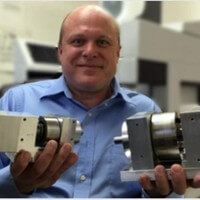 “But once you learn Alibre, it’s such a powerful tool. I thought I was going to have to go back to school to learn this stuff…”
John Pawloski
Founder and Lead Designer
Rolling Motion Industries

“There were other traction drives, but they were very expensive,” John elaborates. “Our technology is very simple and cost effective, so we can penetrate lots of markets while still having differentiators compared to gear boxes. We’re smoother, we’re quieter, and we offer less transmission error. On top of it all, we’re able to offer that for a good price.”

“Our technology has advantages in terms of other traction drives – Low transmission error, there’s no gear teeth so everything is rolling. Low noise. Very high true efficiency, in the high 90s.”

Invention Begins With a Blob

When learning a new program, it’s often the smallest of victories that can feed the soul enough to continue moving forward. For John, the first small victory resembled the title character in a vintage horror flick.

“The first part I made was just a round blob. I got it to revolve and got the axis right, and I was like “YES! A BLOB!” I showed my whole family,” John explained with a laugh.

“But once you learn Alibre, it’s such a powerful tool. I thought I was going to have to go back to school to learn this stuff, and I’m sitting there at 35 years-old thinking, ‘I got a wife, two kids, and a job. I can’t go to school.’ But the program comes to you quickly if you’re open minded, relaxed, and patient.”

For John, the ultimate roadblock was translating his vision into a working model. He needed a software that was easy to learn and met his needs.

“When you see something working in your mind’s eye and you don’t have the ability to draw it, it’s incredibly frustrating. Alibre Design gives you the ability to take what’s inside your head and make it into a 3D model. It’s a complete game-changer because my ability to hand draw is bad and my handwriting is terrible, so I was like ‘this ain’t gonna happen.’ But then I was able to draw on Alibre and actually make what my mind is showing me.”

After learning 3D CAD in Alibre Design, John was able to take his RMI Traction Drive, and subsequent evolutions, to market with success.

“The first units were designed, all in Alibre Design, and they’re out in the field running. We have new versions now, that all were designed in Alibre Design. We use the Simwise stress analysis, that was done in Alibre, too. It’s been a fun ride, but not an easy one. Inventing a product and bringing it to market, it’s a long endeavor. I didn’t think it was going to take 10 years, but patience is a virtue.”

John also notes that Alibre Design has increased efficiencies in taking his product’s evolutions from design to market.

“Let’s say we want to make a design change, I just go right into the CAD model and make the change. In the prototype phase, everything was made here, so it made it exceptionally easy to go into the design, make the change, take it out to the machine, make the part, and then you have your newly designed part. It really is ungodly critical in the design phase.” 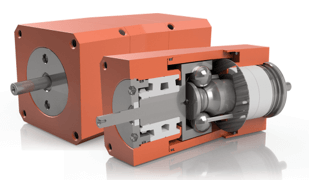 The Future of the RMI Traction Drive

“The medical applications are so precise that you need a very smooth rotation. With hospital beds, you get into a patient comfort issue. Our RMI Drive eliminates the gear noise in the beds, allowing patients to get better sleep during their stay,” John commented.

“It’s a very broad-based application product. We’re putting on the brakes in terms of advertising and because we have so many people lined up already. We’re not trying to rush into it, we’re trying to do it smooth and steady.

“The next month or two we’re going to see sales pick up dramatically and we’ll be a real company. It’s been a pretty daunting task, because a lot of traction drives weren’t able to gain market share because they’re too expensive, but ours were able to do it. It’s a very rare product, and we’re proud of it.”

“When you see something working in your mind’s eye and you don’t have the ability to draw it, it’s incredibly frustrating. Alibre Design gives you the ability to take what’s inside your head and make it into a 3D model. It’s a complete game-changer…”
John Pawloski
Founder and Lead Designer
Rolling Motion Industries