It’s not uncommon to see solar panels installed on homes. Why not wind turbines?

Inventor Helmuth Geiser of Fort Myers, Florida, thought this was an interesting question, and with the help of parametric modeling with Alibre Design, his company now offers a line of small-scale wind turbines that gives solar technology a run for its money.

“I began researching the efficiency and pricing of solar and wind power systems, and I soon found out that photovoltaic systems were very expensive compared to wind. The installed cost per kilowatt for solar systems is about 3 to 4 times higher.”

Taking wind energy out of the farm

Turbines we see in wind farms along the highway can crank out one to seven megawatts. Financed and owned by utility companies, these “megawatt” turbines can be as large — and expensive — as jet engines. Smaller turbines, which generate anywhere from 1 to 100 kilowatts in output, seemed to Geiser like a way to make renewable energy more accessible for individuals.

Geiser says that Europe is using generators in this “small wind” category more widely. In the States, too, small turbines have a long history, although they have been mostly limited to agricultural fields or other remote areas not easily tied to the power grid. Traditionally, turbines pumped water for irrigation or livestock or powered out-of-the-way communications towers.

“When I started my research, I found that existing small wind products were relying on antiquated technologies, some dating back to the 1930s. These did not have nearly the efficiency nor the reliability that would make them practical solutions for household power.”

Geiser set out to improve upon the traditional design, making three major mechanical innovations. Now Scaled Energy – an LLC founded by Geiser and electrical engineering Syd Wells — is in production with a new line of products that now allow homeowners to produce free electricity out of thin air.

The increased efficiency also means the product is usable in many more localities, even those that wouldn’t be considered blustery. “Other small turbines, for example, can’t be used in areas designated as wind-zone two because they would not generate sufficient power, but with Scaled Energy’s product, they can.”

Geiser performed all of his “tinkering” as well as drafting the final manufacturing assemblies on Alibre Design’s parametric modeling application. Geiser says the software was instrumental in turning an interesting question into a real manufacturing business.

Beyond creating virtual assemblies, other modules, like Alibre Motion, allowed Geiser to test the moving parts with animation. Similarly, Alibre CAM was used to convert his designs into precision machine cutting paths.

“Alibre Design offers a good combination of software capability, ease of use, and last but not least, price. I already have recommended Alibre to many inventor friends at the Edison Inventors Association (EIA), and will continue to do so,” Geiser says. “Looking back, I don’t think I could have done this project in this short amount of time without Alibre Design, and with this sort of precision. Alibre Design does more for less – in both time and money.”

How does Geiser’s three major improvements to small turbine design make them house-worthy?

First, Geiser redesigned the pitch-regulating hub, the device that alters the angle of attack of the blades to extract the maximum power from the varying speed of air movements. Old methods rely on furling and braking to avoid disintegration of the turbine when the wind blows too hard.

“Since the blades of these old types of turbines have a fixed pitch, they work inside only a very small windspeed envelope,” he says. Instead, Geiser made a more sophisticated but still inexpensive mechanism that governs the hub only by the air pressure on the blades, thereby expanding the envelope.

Secondly, the speed regulator gets an overhaul as well. This mechanism makes the input of motion to the generator more consistent. Geiser says that “direct-driven” input was the major drag on the efficiency of down-on-the-farm turbines. Add on high-efficiency blades, and the Scaled Energy turbine produces substantially more electricity for the same amount of wind.

Geiser also considered installation and upkeep costs. Out on the farm field, you could erect a tall cumbersome mast with the help of heavy machinery. More urban sites would not have the luxury of open space. “So the idea of a foldable mast was born,” Geiser says. “Homeowners can raise and lower the turbine with the hydraulically operated expandable mast. Servicing the device is also less labor-intensive and less dangerous than tradition support masts.”

Scaled Energy’s most advanced product line will be released soon. How does the latest release test out in economics?

Geiser estimates that a 10-kilowatt turbine could generate about $500 worth of electricity per month, based on Florida prices, so most buyers can see the return on investment (ROI) on a $45,000 system well within 7 1/2 years, not counting any available tax breaks.

“With improvements efficiency, durability, and ease of installation, these turbines are making wind a viable source of alternative energy.” 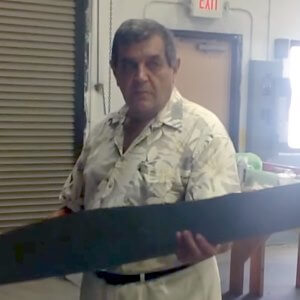 “Looking back, I don’t think I could have done this project in this short amount of time without Alibre Design, and with this sort of precision. Alibre Design does more for less – in both time and money.”
Helmuth Geiser
Senior Managing Member / Design Engineer
Scaled Energy, LLC