An electrical engineer by training, David Milway graduated from UNSW Sydney, Australia in 1908 with an Electrical Engineering degree, which he followed up in 1986 with a Ph.D. in Computing from Cambridge University.

When he’s not winning design contests on the internet, David designs hardware which is programmed into FPGAs for video compression and transmission over digital systems. David was gracious enough to let us spend some time picking his brain about how he uses Alibre Design, his inspiration for his winning submission, and how he got into recreating model engines.

If you use Alibre Design for work, can you describe a few of the benefits you see?

One of the main benefits of using Alibre is that when I have an idea for a new tool, I can sketch it up to test how it might work. It’s nice to be able to change parts of a design and improve it before committing it to metal. Currently, I have an electric furnace is in this state that regularly gets modified as I learn about the insulating material and the properties of heating elements. I recently attempted to learn about the Alibre scripting interface in an attempt to generate a wound heating element which itself is wound around the inside of the furnace, this is currently work in progress.

I spend a lot of time talking with other model engineers about 3D cad and find many think it’s too hard and stick to their 2D cad. I try to explain that 3D is actually easy, can generate the 2D drawings for laser cutting, and can be used to check that multi-part designs actually fit together.

I am currently distracted by trying to become competent in casting parts for the models. I have built a gas-powered furnace for melting aluminum and brass and am currently designing a new electric furnace. This is where Alibre and a 3D printer become very useful for creating patterns.

How did you hear of Alibre Design?

I was introduced to Pro/Desktop around 2003 when my son was using it for school design and technology projects. A little later, when his student license had expired, I went looking for another package, came across Alibre and downloaded a trial package. This version I found much easier to use. I played around with it for a while but became frustrated as I could only have ten parts in an assembly.

Sometime later Alibre offered an entry-level version for $99 which I then purchased and started my quest to become competent in its use.

The first big design I did in Alibre was the Little Samson traction engine. I had started building it from purchased castings using the hand-drawn plans. The reason for starting the 3D model was so I could get a better understanding of how the engine went together. In the process of this, I discovered some inaccuracies in the plans when parts were assembled, only small 1/16- or 1/32-inch errors, and was able to feed these back to the designer.

What motivated you to create this model?

About five years ago I was given a large number of back issues of Model Engineer (including copies from the 1920s) which I found fascinating to read. The author of one article included a full set of drawings for the “2 Cylinder Compound Condensing Engine”, suggesting it would make a good model. I agreed with him and took on the process of creating the 3D design.

From my recollection, the process took about three months to do most of the work. I did start with an extensive library of small parts like nuts, bolts, and rivets which are numerous in the design. What I most enjoy in the process, apart from creating a fully working model, is how to create the intricate parts like the connecting rods, the steam valves and the pumps all with an eye to how I might fabricate them. 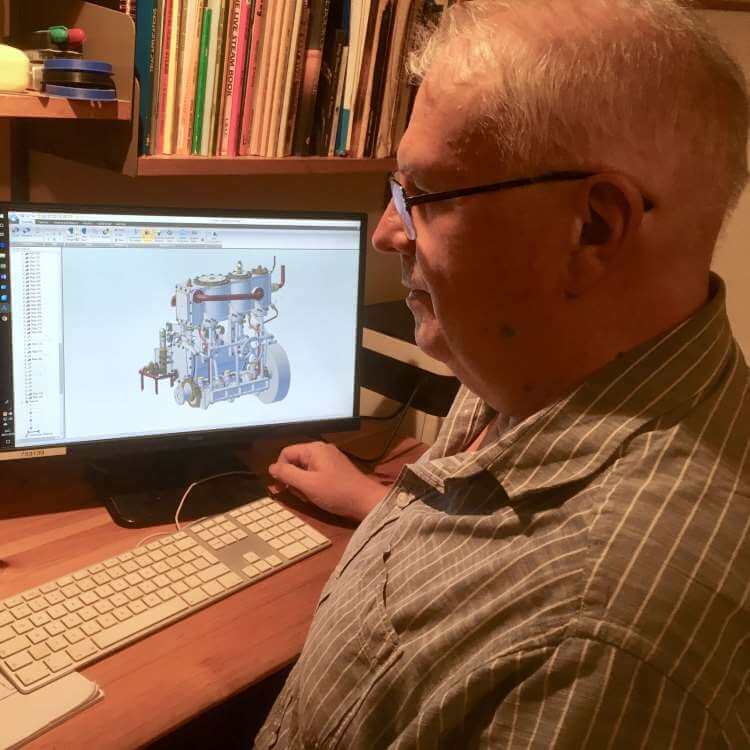 “What I most enjoy in the process, apart from creating a fully working model, is how to create the intricate parts like the connecting rods, the steam valves and the pumps all with an eye to how I might fabricate them.”
David Milway, PhD.
Alibre Design Contest Winner

It seems like you have a cool hobby of recreating historical items, can you share something about that with us?

One of my pass times is model engineering. I have built several small models and have a number of larger models on the go. One is a ¼ scale Little Samson traction engine which is about 75% complete, and another is a 3 ½ inch locomotive, Rob Roy, which is about 40% complete. Some of these models have been going on for more than 10 years as I get easily distracted especially in making new tools. It is not uncommon to end up making a tool to make another tool to make the final part. Some parts can be traced back through a chain of 6 homemade tools and probably more!

I have created a number of other models of locomotives which I would like to build but am sure I will never get around to.

"One of the main benefits of using Alibre is that when I have an idea for a new tool, I can sketch it up to test how it might work. It’s nice to be able to change parts of a design and improve it before committing it to metal."
David Milway, PhD.
Alibre Design Contest Winner