‣ David Johnson learned Alibre Design to design and build utility trailers
‣ After taking on a task from his wife, David learned that he could design on a much grander scale in Alibre Design
‣ Gingerbread Homes used Alibre Design to eliminate inefficiencies in production of modular cottages

It Started as a Small Task...

David Johnson of Gingerbread Homes began using Alibre Design in 2009 to design and build utility trailers. Eventually, David’s wife asked him if he could use Alibre Design to design and build a garage with an apartment over the top of it because his son was coming back from a church mission with no place to stay. He figured this wasn’t out of the realm of possibility; the principles of CAD are the same regardless of the size of the projects - but as most projects do, it became something larger. Much larger.

“It ended up being a 3 bedroom, 2 bathroom house with a kitchen, dining room, solarium, and some fun stuff in it; it’s got a pirate ship for kids, there’s a tree fort in it, and it’s turned out to be quite the amazing little project. It’s just built in my backyard. It’s connected to my house via a staircase.”

That’s right. David Johnson designed a real, functioning, livable modular cottage of your dreams right in his backyard. David got so many compliments from neighbors and friends that he realized there might be a market for cottage assembly kits so people could make their own.

“It was supposed to be a small apartment, but it became a way of me figuring out ahead of time if I wanted to do a project this size or not. I wanted to know if I could take standard dimensional lumber you buy at any hardware store to build this and whether it could be replicated by anyone building it any other place. I wouldn’t have to deal with specially laminated seams or anything like that. My goal was to make the narrowest possible structure and still get an 18x12 roof pitch to make it look like a real old fashioned medieval cottage.”

That’s when David decided to start Gingerbread Homes - creating themed tiny homes for ultra-efficient living while bringing some whimsy to the lifestyle. Each one is designed to make great use of a small space: building upward instead of outward and taking advantage of the opportunity to build furniture into the design. Gingerbread Homes are designed for several use cases including being a functional standalone home, recreational home, an addition to current a home, a play fort in the backyard, or any other place where a standalone home is needed.

“We had an engineer come down from Calgary, and he put his stamp on it. Anything that I made in Alibre Design has been bang-on as far as the structural end of it. It’s gone through all the inspections: electrical, plumbing, and HVAC. Even the foundation was done in Alibre Design - it’s sitting on a monolithic slab which is reinforced to proper specs." 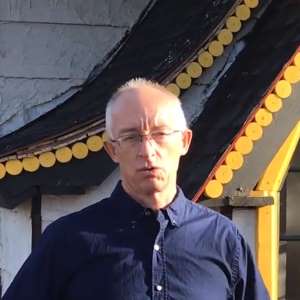 “Anything that I made in Alibre Design has been bang-on as far as the structural end of it. It’s gone through all the inspections: electrical, plumbing, and HVAC. Even the foundation was done in Alibre Design.”
David Johnson
Gingerbread Homes

“For what I paid, if I were to compare Alibre Design to AutoCAD, the user-friendliness, the ease of constraining parts with other parts and making it all fit together as one big, complicated (1,700 parts) assembly is much better. I only had to design it one time, and now I can build these cottages in a factory with 50 different motifs so people can customize to their taste. Now people can order a cottage for their backyard, or even their lake getaway house.” 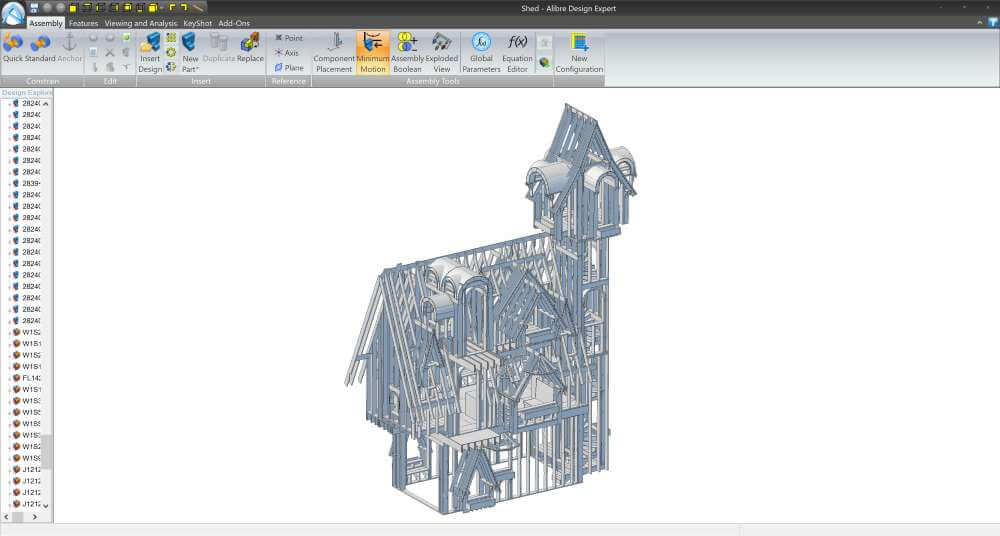 If You Can Dream It, You Can Design It

With Alibre Design, David was able to reduce inefficiencies in building multiple cottages. His desire is to eventually have a factory where he can churn out assembly kits for people who are interested in building their own themed cottage or playhouse. Using his bill of materials made in Alibre Design, David built a relational part database in Microsoft Access where he can perform easy parts analysis when putting assembly kits together. He knows how many of every part he will need for each kit, saving him hours of work.

“I’ve already got these parts built, and I can do a full blown parts analysis with Alibre Design. I’m reducing dunnage as far as the waste of lumber, I can use those parts that I cut off one board for another part, it’s all tracked, all cost out ahead of time.”

“I’ve seen a lot of small scale things done in Alibre Design, and I screamed ‘I built a house in your program!’ It’s amazing what Alibre Design can do. It’s all a matter of dimensions, so I built a subdivision layout in there, too.”

For now, this is a side business for David, but his plans are ready for factory production as soon as he can gain investment. With David’s drive and ambition, the sky is the limit!

“I’ve seen a lot of small scale things done in Alibre Design, and I screamed ‘I built a house in your program!’ It’s amazing what Alibre Design can do. It’s all a matter of dimensions, so I built a subdivision layout in there, too.”
David Johnson
Founder
Gingerbread Homes